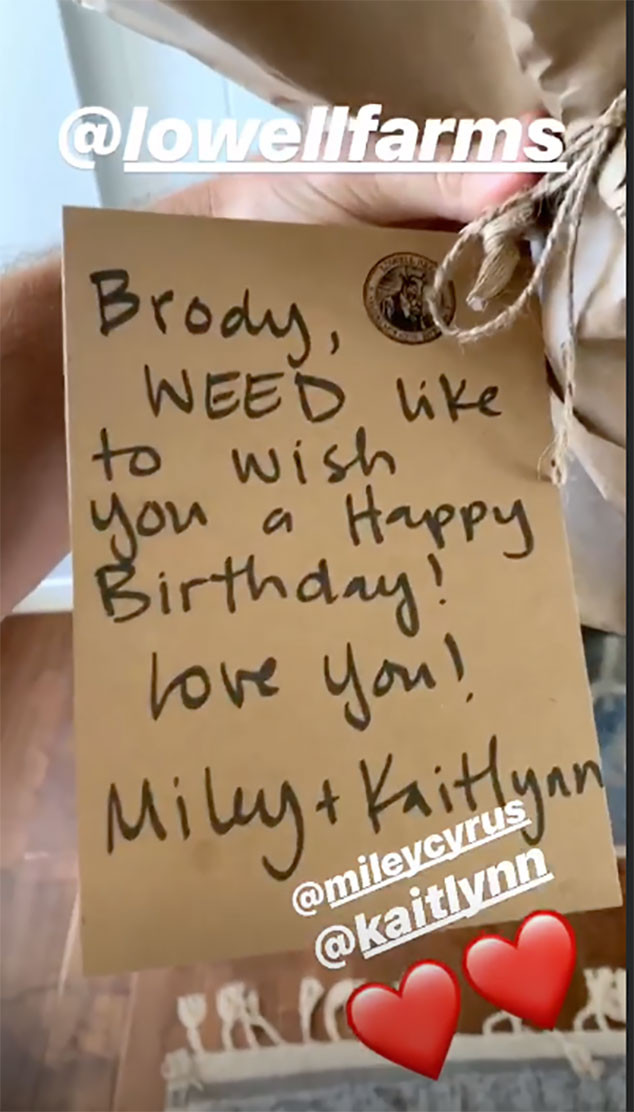 Mere hours have passed since Liam Hemsworth filed for divorce from Miley Cyrus, but that’s already in the past for her and Kaitlynn Carter. Instead, they are focused on bringing joy and zen vibes to one Mr. Brody Jenner. That’s right. The one and only Brody Jenner received a beautifully wrapped gift from his ex and her new boo, Miley. On a birthday card, which he shared to his Instagram Story, Miley and Kaitlynn wrote, “WEED like to wish you a Happy Birthday! Love you! Miley + Kaitlynn.”

The Hills star will most definitely have a relaxed and chill birthday considering the present was comprised of multiple cannabis products and a weed bouquet from the trendy Lowell Farms. According to a rep for Lowell Farms, the product and the cannabis bouquet costs around $1,000.

The gift is definitely on-brand for Miley, who quit smoking weed before her mom ultimately got her hooked again. But, it’s unlikely the artist is dabbling in the product since she is currently in the studio and previously said she doesn’t smoke when she works.

Right now, the pop star is busy channeling her creative energy into new music. She recently released the song “Slide Away”, which seemingly details her tragic split from husband Liam Hemsworth. “Move on, we’re not 17,” Cyrus sings. “I’m not who I used to be / you say that everything changed / you’re right, we’re grown now.”

Liam appeared to get the message loud and clear, because he filed for divorce on Wednesday. He cited “irreconcilable differences” as the reason behind the split.

After news broke of the divorce filing, a source told E! News, “Liam is just done with it. There is no turning back and he knows he wants to move on.” Luckily, the 29-year-old is staying with his family in Byron Bay, Australia, where the insider said he is “taking each day as it comes.”

Meanwhile, Miley and Kaitlynn are spending a lot of quality time together. On Saturday, the pair enjoyed a girls’ day with Miley’s mom, Tish Cyrus, at West Hollywood’s exclusive SoHo House. Together, the three women enjoyed lunch before returning to Tish’s house.

As serious as this sounds, a source previously told E! News that Miley and Kaitlynn have simply bonded over their public breakups.

Don’t miss E! News every weeknight at 7, only on E!