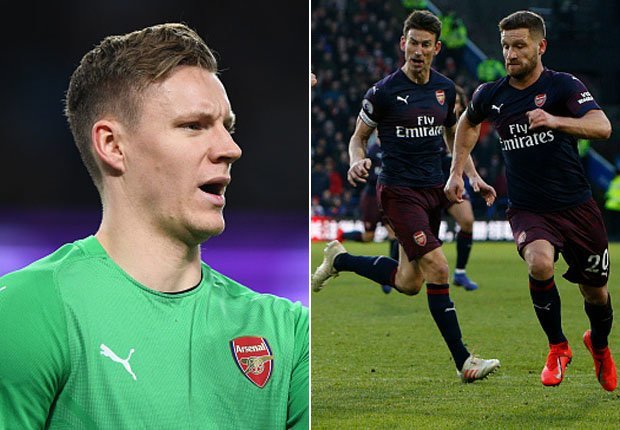 The Gunners ran out 2-1 winners at Huddersfield on Saturday as they ended an embarrassing winless streak of six matches away from the Emirates.

Alex Iwobi and Alexandre Lacazette were on target for the visitors in South Yorkshire, but it was a less than straightforward afternoon for Unai Emery’s men.

The troubled Terriers spent most of the game on the front foot – but all they had to show for their efforts was an injury-time Sead Kolasinac own goal.

The Premier League’s sixth-placed team have the third worst defensive record on the road this season, conceding 26 goals in their 13 away games.

“The most important area is the defence”

And German stopper Leno insists he has had enough of seeing the ball fly past him because the four men in front of him aren’t at the races.

Leno vented: “This season we have conceded goals too easily.

“It always seems to happen when we are two goals in front, so maybe we are losing a little bit of concentration because we feel too comfortable when the games are coming to the end.

Leno was left scrambling against Huddersfield, with his side conceding an own goal (Pic: GETTY)

“We have to work on this because the defence for me is the most important thing to enable us to get back into the top four.

“The most important area is the defence because we have the quality in the front line.”

The Super Eagles winger, 22, put in a shift to be proud of on the right wing – but Emery is keen to see him push on in the coming months and become a top talent.

Unai Emery was pleased with Alex Iwobi’s performance in the win (Pic: GETTY)

“He’s young,” said the Gunners boss. “He has a big commitment. He has a very good physical condition.

“He needs to improve, tactically maybe also, some things.

“Above all he needs to be calm with the ball in the attacking third to have more assists and create more possibilities to score, to know when to shoot and when to dribble.

“He scored and he had another very good chance. He had also the chance to assist Alexandre Lacazette, but I think his performance, starting with his attitude, was very good. And the performance overall was good.”

Robbo: Training camp can make us stronger for run-in