He has been here too many times before, and he has lost all faith in the game’s authorities to do anything about it.

Racially abused throughout England’s 5-1 win in Montenegro last month, he kept his cool and kept his counsel too.

But the Tottenham defender spoke out eloquently yesterday on where he fears football is heading if it cannot finally get to grips with the problem.

“It didn’t affect my game. I’m a big boy now and I know that three points are obviously not the most important thing when you’re going through something like that.

“But I just wanted the team to get three points so that we could move on and get out of Montenegro as quickly as possible.

“I just wanted everybody to focus on a great week we’d had with England. We scored ten goals and it was a great performance over two games.”

Rose’s comments on UEFA come amid news that:

– Leonardo Bonucci being SLAMMED by Raheem Sterling after this racism incident 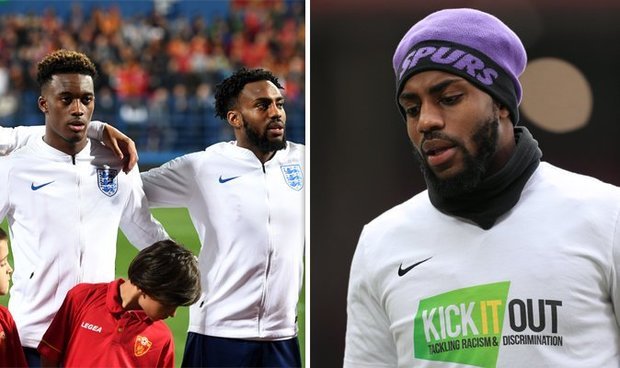 Rose and several of his team-mates were subjected to racist abuse (Pic: GETTY)

Sadly for Rose, he has been here before. Seven years ago, he was pelted with stones and subjected to monkey during an infamous England Under 21 clash with Serbia in Krusevac.

Ridiculously, Rose was actually sent off that day for kicking the ball away as a win for the Young Lions descended into a mass brawl.

But after calling for Serbia to be banned, Rose was disappointed when UEFA hit them with a paltry £65,000 fine and forced them to play their next game behind closed doors instead.

So he knew exactly what he was in for in Podgorica – and despite Montenegro being charged with racist behaviour, he expects nothing to change.

Rose, who was booked towards the end of the game for a fierce tackle which sparked the loudest abuse, said: “I sort of prepared myself anyway for what happened, so I was fine.

Rose recently wore a ‘Kick It Out’ t-shirt to help raise awareness of the issue (Pic: GETTY)

“Had we not been winning the yellow card that I got at the end might have been a red one. We won and now we just wait for whatever punishment, if any punishment happens.

“I played in Serbia years ago and it happened there, so I sort of thought it would be a possibility that it might happen again and it did.

“It’s just a bit of a farce at the minute. So that’s where we are at in football and until there’s a harsh punishment there’s not must else we can expect.”

Asked whether he was pleased to hear his Tottenham boss Mauricio Pochettino insist recently he would take his players off if they were ever racially abused, Rose said: “Yes. Over the moon.

“I spoke to Gareth Southgate after the England game. I didn’t mention it at half time so he wasn’t aware of what was happening until he heard it right at the end.

“The manager was a bit upset to be fair because he told us it was the first time he’d been involved with something like that and he said he didn’t know what the right course of action was to do.

“He said he was fully behind me if we wanted to walk off. I just wanted to get the three points and get out of there as quickly as possible.”

Rose insists he won’t let the racists beat him. But he also admits he will be glad when his career in football is finally over because they have made him hate the game he loves.

He said: “I’ve had enough. I just want to get out of it. I’ve got five or six more years left and I just want to enjoy it as much as I can. I can’t wait to see the back of it, to be honest.”

There is nothing more damning about football’s inability to finally get tough on racism than that.

Liverpool: What it would mean if Jurgen Klopp’s side can win Premier League